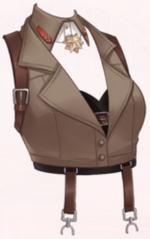 She is the army major of North, she swore to sacrifice her life to her people from the day she joined the army.

Crafting
Army Vest can be obtained through Recipe Crafting.

A black tube top with a strap at the middle, worn beneath a light brown vest held by two small buttons. A brown buckled strap resides on each shoulder, while a black one with hanging brown straps wraps around the bottom. The top is shaped to expose the middle of the collarbone and chest, and hanging from the collar is white fabric and a small gold ornament.

The recipe can be obtained from the Extra Stage Bonus, after completing stage V1: 10-2 Kimi's Encouragement (Maiden).

Retrieved from "https://lovenikki.fandom.com/wiki/Army_Vest?oldid=157622"
Community content is available under CC-BY-SA unless otherwise noted.