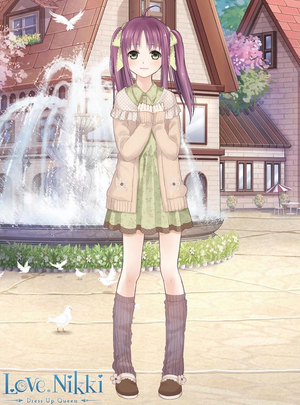 Annabel is a character in Love Nikki. She is a manga artist that Nikki occasionally runs into during her travels.

Annabel is a short girl who wears a cardigan and earth toned dress. Her purple hair is tied up into two twin pigtails with green ribbons. She has big and bright green eyes and has a pleasant demeanor.

Annabel is a lively and eager young girl. She has a wild imagination, always dreaming of scenes that she could draw in her manga. She loves telling people about her stories and enjoys traveling around Miraland for materials and inspiration. She also is very plucky and strong-willed, and near completely devoted to her goal to be a good manga artist - which at times brings her trouble; ie, in the Wasteland-based Wind Deep Legend Event she was in danger of being swept away in wind currents while researching about the warrior Lika and the fortune teller Cassandra, and needed the help of Nikki and her group.

While visiting Cicia Design School, Nikki, Momo and Bobo met Annabel for the first time. She said she visited the gallery for inspiration.[4] They ran into her again after the disaster in the 'Witch and Star Sea' play, and commiserated over what happened. Annabel also told Nikki that she brought inspiration wherever she went.[5]

At the Designer's Tea Party, Annabel dragged Nikki away for an impromptu interview about whether she had met any handsome designers in her travels. It was implied that Nikki was unable to give her any such information. They talked about the romantic style of the Republic of Wasteland and how it might make for a good setting for her manga.[6]

Annabel met Nikki and her friends again before the Fantasy Styling Contest. She revealed that her manga was published and got great reviews.[7] Annabel revealed later to Nikki and her friends that another scene of her manga would occur at the Fantasy Styling Contest and said she was there for inspiration.[8] Before the finals, Nikki wondered who the other finalist will be. Annabel appeared and said it was someone cold-tempered, with beautiful flowing long hair that looked like a china doll.[9]

Nikki and her friends ran into Annabel by chance at the Republic of Wasteland, and she talked about her plans for her manga characters to meet there.[10]

Annabel's manga is a love story between a male fashion designer and a female stylist.[11] They have a long, epic romance that traverses several books. These books are named:

At the ending of the first one, the hero of the story is preparing to make a romantic love confession at Wintermount, Lilith. After it was first published, it got excellent reviews, and her editor requested that she write a sequel.[7]

Annabel says that she takes a lot of inspiration from Nikki for her manga, and the manga is, in fact, based off Nikki.[12]

Airi is Annabel's high school friend who is also a painter. They enjoy painting together, with Airi being good at oil painting and watercolor. Annabel sent Airi a pendant and got excited when she went to visit her. Annabel speaks of Airi highly, saying that she's always smiling and has long, soft hair.[15]

Annabel met Satir once when Annabel was collecting material. Together, they found Satir's sheep Bleaty and went to see newborn lambs. As a thank-you, Satir gave Annabel a basket of fresh fruit, which Annabel loved.[13]

Retrieved from "https://lovenikki.fandom.com/wiki/Annabel?oldid=143581"
Community content is available under CC-BY-SA unless otherwise noted.