Love Nikki-Dress UP Queen! Wiki
Register
Don't have an account?
Sign In
Advertisement
in: Wardrobe Item, Item in suit, Hair,
and 8 more 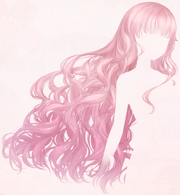 In the game Interstellar, Angelika is a beloved princess of a stage Pink Galaxy Bastion.

Angelika
Angelika (previously named Angelica) could be obtained during the Interstellar event and can now be obtained through Recipe Crafting.

Long, wavy pastel pink hair with neatly brushed bangs and curled forelocks. The hip-length hair billows out towards the side.