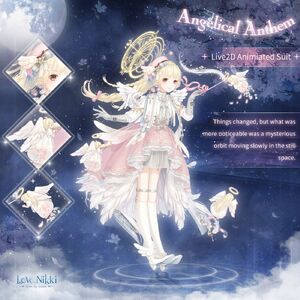 Things changed, but what was more noticeable was a mysterious orbit moving slowly in the still space.

Angelical Anthem is a Lilith suit that can be obtained via the Arcane Astrolabe event. It is the second Live2d interactive set, which has a special animation when all pieces are worn.

'Everybody is equal before the gods.' She breached light, freedom and love to people but was opposed by the church.
– Light Courier

She also firmly believed that pious souls can go to heaven, but the heaven in her eyes my not be the same as told.
– Holy Light

She insisted on making her own voice. And finally got assassinated by the killers sent by the church.
– Voice of Truce

She was loyal to the gods, but never gave up what she thought was most important: the eternal justice.
– Eternal Grace

This is a paradise that belongs only to her, but gods for everyone live here. Gods are fair, the choices are yours.
– Advent of Divine Light

Things changed, but what was more noticeable was a mysterious orbit moving slowly in the still space.
– Wheel of Fate

She observed silently. Although history always repeats itself, the trajectory changed whenever a fighter shows up.
– Origin of Reincarnation

Those trajectories are weak but bright, weaving into the vast sky and depicting a new world and a new future.
– Brilliant Course

She saw swordsmen who rob the rich to feed the poor, and their stories didn't end on the guillotine.
– Unfinished Sigh

In a few years, the decaying dynasty was defeated by rebel armies. A new era was built under the lead of heroes.
– Spark Starts Fire

She saw speakers who awakened the people, like a shooting star that lit up the long light before dawn.
– Immortal Stigmata

She also saw a lad who swore to break the chain of bloodlines. He drew a vast trace with the longsword in his hand.
– Vast Future

And tonight, she saw the trajectory slowly moved again. Grand changes were going to happen in the future.
– Angel’s Psalm

Only time can answer if it was right or wrong. She watched every glorious trajectory. Life was short but heavy.
– Sacred Blessing

Retrieved from "https://lovenikki.fandom.com/wiki/Angelical_Anthem?oldid=146245"
Community content is available under CC-BY-SA unless otherwise noted.