The Ancient Pavilion Designer is a character in Love Nikki. He was a legendary designer said to live in an ancient building in the Flower Field in Cloud.

The Ancient Pavilion Designer was a wise man with a good sense of humor. Though he was a strict teacher, he understood the value of learning in non-traditional ways as well, and enjoyed fresh perspectives.[5] However, he was also described as seeming indifferent when he heard and experienced the story of Evelyn.[4] 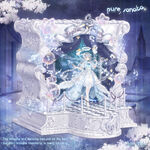 Oceanic, Oceanic-Rare, and Oceanic-Epic (above)
Add a photo to this gallery

The Ancient Pavilion Designer was taught alongside King Sayet earlier in his life by the same teacher.[7] During this time, they became friends as they learned to become master-grade designers.[8] The two traveled together, and managed to enter the Pigeon Forest, where they met Rachel. Rachel showed them the memory of Evelynn through one of the steles in the Stele Forest, but the Ancient Pavilion Designer was not strongly affected by it.[4]

In the year 630, he encountered Fu Su claiming to be a disciple of his in order to sell things and make money in the Flower Field.[9] Instead of disciplining him, he asked Fu Su where he learned to style, having seen him battle Spring (and lose).[10] When Fu Su responded that a deer taught him, the Designer laughed. He gave him some advice, and asked him to compete with the Flower Field Fairies. When Fu Su won, the Designer offered to teach him, which Fu Su eagerly accepted.[9]

The Ancient Pavilion Designer taught Fu Su for many decades as time went by. One day, he learned that King Sayet passed away. He summoned Fu Su and asked him to visit Pigeon for him to give his condolences. The news troubled him greatly, and he expressed great sadness over Sayet's passing.[11]

After Fu Su returned from Pigeon, the Designer's health began to decline. He tried to tell Fu Su that he should leave the Pavilion, saying that the seal protecting the Pavilion caged them in as well and adding that Fu Su should leave.[12]

While Fu Su was out picking herbs one day, the Ancient Pavilion Designer passed away in his bed. Fu Su's deer, Bambi, alerted him to the occurrence.[12] Fu Su carried out the Designer's last wish by putting his body on a bamboo raft and floating it down the river in the mountain.[1][13]

King Sayet and the Ancient Pavilion Designer were old friends who were instructed together,[7] and both became powerful designers.[14] As adults, they did not often visit each other.[15]

Fu Su was very grateful for the option to study under the Designer, and never took it for granted, especially since he had been homeless and poor before.[18] He was a dutiful student for years and years, with his only transgression being that he left the Pavilion with Winter without permission.[12] He later describes the Designer as his role model.[1]

Fu Su took care of the Flower Field after the Designer's death. It is implied that he did not tell anyone, or many people, about the Pavilion Designer's death, given that Lunar did not know he had passed.[19] The Designer wanted Fu Su to leave and broaden his horizons, but Fu Su believed that by staying in the pavilion, he would be able to inherit the Designer's will and become a great designer. However, after Fu Su met Nikki, he was finally inspired to leave and journey the world.[20]

Retrieved from "https://lovenikki.fandom.com/wiki/Ancient_Pavilion_Designer?oldid=171308"
Community content is available under CC-BY-SA unless otherwise noted.