The Amphithea Group is a corporation from the Apple Federation. It is headquartered in Welton. Its functions include delivering mail and producing the first transnational newspaper in Miraland.[1]

The Amphithea Express delivers a great deal of mail in Miraland, including all of the stamina sent between players and official notices and packages containing gold and diamonds.

In the year 680, the Amphithea Express established a news department, intending to use their delivery capabilities to deliver the newspaper all over Miraland. This would make it the first newspaper to do so. The newspaper quickly became very popular in Miraland.[1]

Amphithea also has a magazine for young girls, which Timi works for as a columnist. It is considered the most popular magazine of its type in Miraland.[5] It has a certain column or section called "Occult Journal", which publishes articles on strange happenings in Miraland.[7]

The Amphithea Group was an existing delivery giant before establishing their own news department and potentially aiming to create a transnational newspaper.[1]

Right before Nikki and her friends were about to enter the Windvale Forest, a messenger from Amphithea News appeared, delivering the news that Nidhogg and the League Tyr were attacking Cloud City.[8]

While in Rosset trying to find a way to Cloud City, Nikki and her friends met Mrs. Von Rhein, the wife of Amphithea News' president. She was attempting to secure the safety of her daughter Nora Von Rhein, who was in Lor River City. After discovering that that city was safe, the lady gave her tickets to Nikki so that they could ride closer into Cloud.[9][2]

Outside Cloud City, a journalist from Amphithea News named Cali met Nikki and her friends. She was eager to follow the story of North's attack, and took them through her secret passageway into the city.[3]

Amphithea reported on the conflict between Cloud and North further, which Cali relayed to Nikki and her friends as they escaped the city. They wrote that the King of North opposed Nidhogg's attack and wanted to rally the nation together. However, the League Tyr's reason for attacking was related to a treasure that they believed Cloud had taken from them.[10]

Amphithea also alerted Cali of further breaking news, involving a shift in power of the Apple Federation Apparel Group. Chairman Schiller, the previous president, was replaced by the financial officer Charles. Before leaving, Cali promised that Amphithea would report further on the matter.[10]

Starlet also took an interest in Amphithea News. She wanted to apply to the newspaper and start a daily horoscope. However, she was scared by the professionalism of the newspaper and the prospect of people everywhere reading her words.[1] Upon the encouragement of her mentor Star Seer, however, she landed a job there. She left for Welton two weeks in advance, but still got lost on the way to the building and had to rely on Nikki's help. The editor-in-chief was relieved nothing had happened to Starlet, and thanks Nikki and her friends for helping to get her there in time.[4]

Timi also became a columnist for Magic Star, a magazine under Amphithea News.[5] 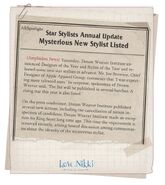 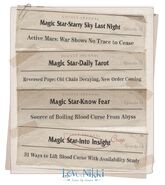 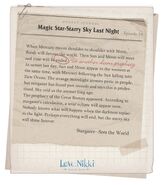 Magic Star
Add a photo to this gallery

Retrieved from "https://lovenikki.fandom.com/wiki/Amphithea_Group?oldid=128834"
Community content is available under CC-BY-SA unless otherwise noted.