Love Nikki-Dress UP Queen! Wiki
Register
Don't have an account?
Sign In
in: Suit, Lilith Kingdom Suits, Alice in Wonderland,
and 2 more 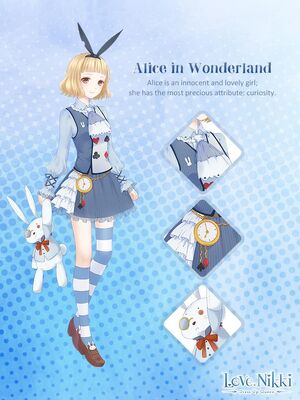 Alice is an innocent and lovely girl; she has the most precious attribute: curiosity.

Alice is an innocent and lovely girl, she has the most precious attribute: curiosity.
– Alice


Alice enters a kingdom through a rabbit hole. It reminds Nikki that she is going through the same story.
– Alice in Wonderland


Alice met the fierce Queen of Hearts, the nice King of Hearts, and the arrogant Knave of Hearts in the large garden.
– Alice's Adventure


Alice seems to be the only one who is sane. She keeps exploring and asking herself who am I.
– Wonderland


Alice chased a speaking rabbit which has a pocket watch. She dropped into a hole and started her journey.
– Rabbit Hole


The march hare goes wild only in March, while the hat craftsman goes mad the whole year.
– March Hare

The items tell the story of Alice's Adventures in Wonderland, which is about a girl named Alice who goes into a wonderland and meets many strange characters and creatures. Nikki relates to Alice, since she also went to a different world, Miraland, and met lots of new people.