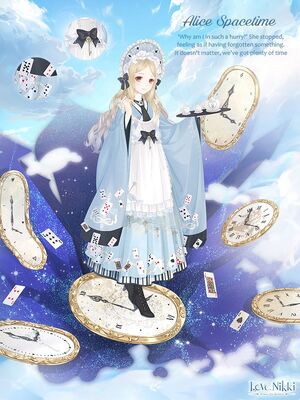 "Why am I in such a hurry?" She stopped, feeling as if having forgotten something. It doesn't matter, we've got plenty of time.

Alice's Time Gate (previously known as Alice Spacetime) is a Lilith suit that could be obtained after recharging at the $4.99 USD tier or higher from March 10th to the 17th, 2018.

Alice has a beautiful blond from her mother. The rabbit tea party in March will open in the afternoon.
– Song of March Hare

The Alice in new dress rotates merrily, but she didn't see that poker pattern made her a covenant of prison
– Contracted Cards

The rabbit was stitching Alice an apron carefully: one stitch to forget time, another to imprison space…
– Hand Made Apron

Why am I walking in such a hurry? Alice stopped. She felt she forgot something, but whatever, she has time
– Black Pointer

Though it's the first time she wore the hat, she felt it's so familiar. It's cute, but it looks old-fashioned
– Spacetime Tea Party

The tea party is to begin in no time! Alice quickly made a Windsor knot[1] and caught up with rabbit
– Spade Tie

Leave! Voices from void are calling her name, but Alice, humming a song, is lost in dressing up herself
– Eternal Clock

The suits describes Alice and the rabbit being late for a tea party in the afternoon, sometime in March. It is mentioned that she inherited her blond hair from her mother and that the rabbit had stitched her apron: one stitch to forget time, another to imprison space. Due to the poker patterns on her dress, she had a covenant to prison, and there were voices from the void telling her to leave. Unaware of the truth, Alice payed no attention to it and dressed herself up, humming a song.

Retrieved from "https://lovenikki.fandom.com/wiki/Alice%27s_Time_Gate?oldid=136163"
Community content is available under CC-BY-SA unless otherwise noted.