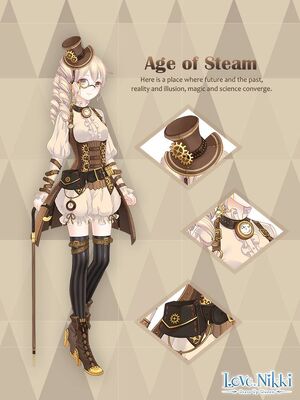 Here is a place where future and the past, reality and illusion, magic and science converge.

In the Victorian era of booming classicism, this hairstyle represented grace and nostalgia.
– Victoria

A costume that blends elements of future, past, reality, fantasy, magic and science.
– Steam Punk

It is the most powerful era, a rapidly spinning time of magic. Meanwhile, it is as enigmatic as Ruin Island.
– Age of Steam

The golden age that was from Nikki's world, seems to be still going on in the Miraland.
– Classicism

The magic machinery step over darkness and damp and pass the cumbersome steam machinery.
– Magic Machinery

Though made of mechanical components only, it still contains sense of demeanor.
– Gear Hat

It reminds you of the Age of Steam.
– Retro Monocle

Even though the high-tech revolution brings a lot of new things, still we need to respect the traditional charm.
– Retro Crutch

At the age of steam, technology is magic; but conversely, magic is also a kind of technology.
– Steam Belt

If the white pigeon of the Pigeon Kingdom lays on your shoulder, you will become the best designer.
– Pigeon Song-Brown

When Queen Elle was a young princess, she already displayed her exceptional talent as a stylist.
– Pigeon Song-Blue

The suit describes the Victorian era of the Pigeon Kingdom. This golden age is a powerful time period that blends the future and the past, reality and fantasy, and magic and science. However, Pigeon incorporates the traditional charm of their past even as they moved into this more technologically advanced era.

Retrieved from "https://lovenikki.fandom.com/wiki/Age_of_Steam?oldid=145589"
Community content is available under CC-BY-SA unless otherwise noted.