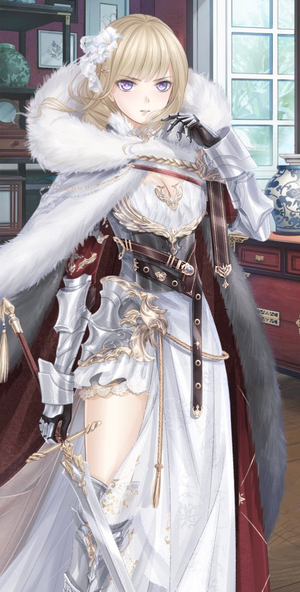 Agata is a character in Love Nikki. She is the former leader of the Knight of Kingdom, the royal army serving the king of the North Kingdom.

Agata is a serious and deeply loyal person. Her love for the North Kingdom and her promise to her friend Naga to protect people stayed true throughout her life, even among a changing political landscape. Even though she swore her loyalty as a Knight, she abandoned the position as soon as she realized that remaining a Knight would go against her principles. She is exceptionally brave, and she does not back down in the face of danger.

Agata was born in Harrod, a port town in north North.[2] She was once close with a girl named Naga. At some point, they were saved by Knight of the North Kingdom, which inspired Agata to also become a knight; Naga wanted to become a designer, herself.[3] They practiced swordsmanship together, and they made an agreement to bring peace to the world.[1] However, Naga passed away in the snow of the North Kingdom.[4]

During February of this year, Agata signed up to become a soldier for the King on behalf of both herself and Naga. She was dismayed to find that she was rejected since she was only thirteen. However, when Agata spoke with the then-leader, the Knight Commander, he allowed her to join the knights' training.[1]

She trained hard for months, and finally submitted her request to become a knight in August of the same year during the annual qualification. The Knight Commander told her that she had the gift and heart to become an excellent knight. After an grueling test, Agata passed and was accepted as one of the knights.[1]

During her time as a knight, Agata learned more about two of her seniors, Nidhogg and Louie. Like her, Nidhogg became a knight when he was only thirteen, though he passed on the first try easily. When Agata heard about his reputation for being cold, sharp, and emotionless, she looked forward to taking him on as an opponent, and respected his skills even though he did not have the best reputation.[1]

In September, Agata challenged Nidhogg during training. Though he agreed to her challenge, she could tell he didn't use his full power. She confronted him, and he just smiled and told her she was too weak to be his rival. Agata did not like this answer, and resolved one day to seriously challenge him.[1]

Agata was promoted to the captain of the Knight of Kingdom due to her loyalty to the North. This made her the youngest ever Knight Commander in North's history.[2] When this happened, she went and visited Naga's tomb to pay respects.[4]

She also accompanied the exiled Prince Bran to Glavier, where his father the king had set up a house for him to stay in. During their trip, she noticed that he didn't really have a strong desire to be the King, and he actually seemed happy to live in the mountains. He also gave her a wooden bow and asked her to give it to his father for him.[3]

During this year, King Ryan died. As the Knight Commander, Agata was meant to inform all of the royalty, but recognizing that the King died without a will and that all of the remaining warlords had equal inheritance rights, she felt that telling everybody would throw the North Kingdom into turmoil. She and the other Knights were not supposed to interfere in conflicts like this, only serve the King, but she didn't want North Kingdom to go to war again.[3]

It was then that she remembered the King's son who was still living in the mountains, and Agata realized that if he stepped in, then the warlords wouldn't attack Black Water City. As soon as she discovered that news of the King's death had gotten out, Agata immediately gave the order to the other Knights to go retrieve him.[3]

Warlords began to arrive outside Black Water City, angry at the Knights for not announcing King Ryan's death. Agata gave the order to keep the city gates shut in order to protect the civilians. As she hopes that Prince Bran was found, she saw another army appear on the horizon. It was led by Duke Dimitry, who had found Bran before the Knights did.[3]

Despite the shock of seeing Prince Bran after nine years, Dimitry ordered Agata to open the gate to the city. Since it was on behalf of the King, she had no choice but to open it. As they stormed into the city, Bran fell off the carriage and was killed, to everybody's surprise. Agata later realized that this act was a suicide, remembering that Bran didn't want to be king.[3]

In the aftermath, it became clear that Dimitry was going to become the next king. However, Agata hated the idea of serving the person who had kidnapped the Prince. She realized that the only other option was to quit, so she tore the badge off her chest and threw it to the ground. Agata officially declared that she was giving up her position as Knight Commander and serving the people of North instead before going to fight the intruding warlords alone.[3]

Agata went on to form a rebel army promising to fight for peace, using connections from her time as Knight Commander. Her aims also included keeping innocent people from having to fight if they didn't want to, which was a contrast to Dimitry's policy of mandatory conscription. Though she received some support, she had her fair share of critics as well, especially among those who felt that North should be ruled by those with the bloodline of Queen Catherine. Some also believed that she may have colluded with League Tyr or pirates from her hometown of Harrod, neither of which were true.[2]

Agata and Naga were close to each other in their youth, especially when they practiced swordsmanship together. The two wanted to bring peace to the world, but unfortunately Naga passed away. So, Agata decided to become a soldier for both herself and Naga. Later in her life, she visits her tomb to pay respects.

Nidhogg was one of Agata's two seniors along with Louie. They shared the experience of becoming knights at the young age of thirteen, and Agata saw Nidhogg as a rival. However, when Agata challenged him for the first time, Nidhogg didn't use his full power against her. She confronted him and he told her that she was too weak to be his rival. Agata disliked his answer, and vowed that she would one day challenge him more seriously.

Agata with Yvette, Shade, and Ming Shuiyuan
Add a photo to this gallery

Retrieved from "https://lovenikki.fandom.com/wiki/Agata?oldid=143732"
Community content is available under CC-BY-SA unless otherwise noted.