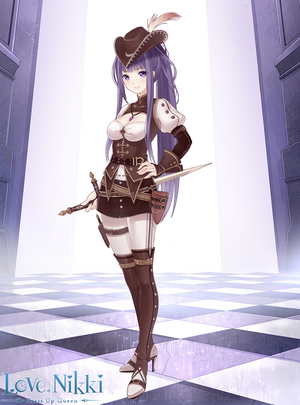 Ace is a character in Love Nikki. She is a wandering swordswoman and comes from Pigeon Kingdom. She is the younger sister of Queen Elle, and the daughter of the old King and Queen.[1]

Ace has purple eyes and hair that's kept in a long, loose high ponytail. She wears a brown and white swordswoman's outfit and a feathered hat, and carries a sword with her. She also wears an amethyst necklace.

Ever since she was young, Ace wanted to help people and freely travel around. As a swordswoman, she works hard to do both through all of Miraland, and she knows a lot of places and people. She also keeps herself calm and cool no matter the circumstances.[16]

Ace dreamed of becoming a chivalrous heroine and helping the weak since she was young.[16] She and her older sister Elle used to happily indulge her in her innocent fantasies when they played together.[1]

They grew older and began to plan for the future, traveling across Pigeon to visit orphanages and live with its people, as well as studying and writing reform plans. Their joint goal was to give the people of Pigeon happy lives.[2]

As years passed, however, their beloved father and then-King fell ill and died. Ace was too young to understand the huge emotional impact this had on her sister, and could not do a lot to keep her from growing into a bitter and cold Crown Princess and Queen. But even as the sisters grew distant, Ace still loved Elle and heavily blamed herself for, in her view, not having been able to help her when she needed it.[1] She continued to try and remind Elle of their shared dream of improving Pigeon, but her pleas fell on deaf ears as Elle became more stubborn.[2]

At some point, Ace obtained a seemingly ordinary yet special amethyst necklace and decided to wear it all the time.[16]

Ace met Nikki, Momo, and Bobo before the Fantasy Styling Contest. She revealed that she had met the Fantasy Envoy multiple times in her world travels, describing both of them as "restless souls". Ace was in town for the stylist contest as well, and she asked Nikki to practice styling using the Envoy's Super Fantasy Interlink PK Skill, causing Momo to exclaim that she was a lunatic just like the Fantasy Envoy.[5]

Ace progressed to the finals of the Fantasy Styling Contest along with Nikki and Sherry.[17] She and Nikki met up the night before the finals, and agreed that they would both try their best.[18]

During the finals of the contest, Momo noticed that Sherry seemed to be staring at Ace constantly.[19] Rebellion broke out after Ace and Nikki competed, and they were trapped on the stage. Nikki was distressed by the sight, but Ace gave her encouragement and they managed to escape together.[20]

Ace quickly realized that a rebellion is happening, observing the disciplined hidden soldiers' movements. She instructed Nikki to sneak out with her through a side gate and leave the city. Nikki protested that she could not leave Bobo and Momo behind, so Ace relented and they decided to find them in the garden.[21] After they found them, Ace decided they needed to find Prince Royce, and noticed that none of the rebellious soldiers were Lilith imperial guards.[22]

After she learned of the prophecy relating to the Miracle Scroll, Ace declared she would accompany Nikki to Wasteland to help her find it, since she had been traveling all her life anyway and wanted to find out what was causing the Miraland Crisis.[23]

Ace, Nikki, Bobo, and Momo journeyed to Wasteland together, and though she had never been there before, she told everybody to be cautious.[24] Once there, Ace remarked on the tents and wooden huts in Wasteland, saying that she had never seen anything like them before.[25]

Upon hearing lively music, the party was excited to see a bonfire party. Ace urged caution in case they disrupted some complicated rites of one of the many local religions, but Bobo rushed in. Luckily, they found that the locals were friendly.[26] After defeating Ransa and reclaiming the Pota tribe's leadership for Tuda, the Chief revealed that Ransa once gave him a badge. Ace recognized the badge as belonging to the Iron Rose.[27]

On their way to Windvale Forest, they encountered Sherry, who had been waiting for Ace all day. She asked for a private conversation, and when Ace tried to refuse, Sherry began to say, "You know, your purple..." which was enough to cause Ace to relent.[28] After her private conversation with Sherry, Ace told Nikki that she was leaving immediately, because there was "something important that [she had] to figure out". She insisted that this was entirely her own decision and that she would return when she was done with her business.[29]

Ace ran into Nikki and her friends once more in Losol, where she told them she was there to see a friend. She was surprised to see Nikki in an alleyway of the dangerous city.[30]

Ace went to the North Kingdom next, traveling on an airship with Debbie. She rescued Nikki, Momo, and Kimi after Louie jumped in front of her and saved her life in a confrontation with Nidhogg. Debbie berated her, telling her that going back for Nikki and her friends had slowed them down, but Ace only told Debbie she had wanted to compete with her again after all.[7] On the airship, Ace then turned on the communicator for Nikki and her friends, allowing them to talk to Orlando again.[31] She was seen later on the airship reading an "ancient-looking tome".[32]

Elle is Ace's older sister. They used to be very close as little girls, but grew apart after their father's death. Ace feels terribly guilty about losing her closeness to Elle, believing that she could have averted her fall into depression and later ruthlessness.

Ace is admired by Nikki for her free lifestyle.[16]

Retrieved from "https://lovenikki.fandom.com/wiki/Ace?oldid=171326"
Community content is available under CC-BY-SA unless otherwise noted.