Start a Wiki
Welcome to the Love Nikki-Dress UP Queen! Wiki

This is a wiki for the mobile game Love Nikki-Dress Up Queen! made for and by fans. It is currently a work in progress, so feel free to create and edit pages. Just be sure to follow the community rules. If you're new to the game, this is a good place to start.

What is Love Nikki-Dress UP Queen!?

Love Nikki-Dress UP Queen! is a mobile game created by SuZhou Nikki Co. (later changed to Paper CO. China) and published by Elex. The premise of the game is to style the main character Nikki and challenge NPCs and players alike in style duels, where the participant with the best and most relevant fashion sense wins!

In the year 672 of New Era, the much-revered stylist and sovereign King Sayet passed away, leaving three great outfits known as his "legacies" behind.

For these treasures, nations were on the verge of war. Finally, reason prevailed and people decided to use styling contests to determine the ownership, rather than ravaging their lands. The contest was held in Roertedam, a city on the border of Apple Federation and Pigeon Kingdom; so many stylists, designers, and models stepped onto the stage to show their best that the match lasts as long as 9 days, the intensity was beyond imagination. The contest was known as the "Nine-Day War".

None of the famous competitors back got the last laugh, however. Two new stars won the final prize -- young Princess Elle of the Pigeon Kingdom and an anonymous girl with pink hair. The then 16-year-old Princess Elle won two of the three legacy works and thus was given the name "The Goddess Reborn". The girl with pink hair, who called herself "Hostess L", went away and vanished into thin air with the last relic.

In the Year 676 of New Era, 20-year-old Elle assumed the throne and started the age of the "Iron Blood Reign". A group of 10 elite stylists, the Iron Roses, was organized by Queen Elle to seize precious clothes parts across the whole land...

In the year 680 of New Era, Queen Nanari of Lilith Kingdom summoned a girl from Earth named Nikki to Miraland, hoping that she would be able to shift the course of this land's fate. From then on Nikki, her talking cat Momo and her friends travel through Miraland, gaining the power and the knowledge they need...

Server Time
# This template displays server time for Love Nikki. It will not display properly in preview mode or on mobile. Please view the page in desktop mode in order for it to appear. _ -8:00 LN
Birthdays

A new poll will appear from time to time. Previous polls. 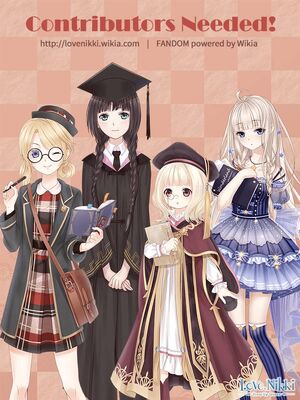 Are you interested in helping edit the wiki? Visit any of the following categories to see pages that still need work:

Please refer to this page for more info.

This wiki is not affiliated with nor endorsed by Elex Technology or SuZhou Nikki Co., Ltd in any way.
Licensed material used on this site qualifies under fair use and Creative Commons license. All trademarks go to their respective owners.
Retrieved from "https://lovenikki.fandom.com/wiki/Love_Nikki-Dress_UP_Queen!_Wiki?oldid=128563"
Community content is available under CC-BY-SA unless otherwise noted.